I'm sure that I am not the only one who treasures their pets whether it's a dog, cat or budgie. I n my case it's my dog well we have two actually, two Jack Russel's and they are adored. Lucy and Jim had six puppies three years ago and they were adorable it was manic having all these little balls of fluff everywhere. Puddles and little poo piles were frequently cleared up.

You couldn't have two very different personalities. Lucy is quiet but the boss and Jim is noisy and thinks he is the boss but that  is an over thought on his part because Lucy very clearly has the authoritative voice between the two...always. In fact she is the diva of the doggy world. But we love them both and they are very much part of out family.

While Jim is very healthy poor Lucy has had a lot of problems, two discs in her back slipped and she was paralised for some time, but with medication and lots of hydrotherapy she can now walk but sometimes with great difficulty. In the last twelve months we have been fighting to save her from going blind, but after our visit to the vets on Thursday she decided to take Lucy of all medication. She is now totally blind in one eye and has only peripheral vision in the other . To begin with she was bumping into everything and we joked that she would have to have a crash helmet but amazingly she is coping very well and as long as we don't move anything she has managed to avoid concussion.

The sad news was that we were told she may have two months or she may live for twelve months and that was a shock to us. We still take her to hydrotherapy because it helps with her back. Sometimes she surprises us and tries to play actually in her younger days she used to play pool with the guys and pushed the balls into the corner holes with her nose. 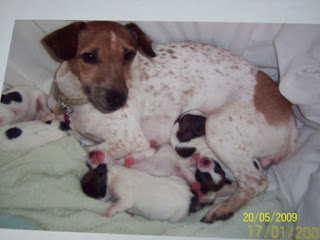 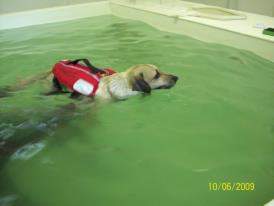 Swimming with her life jacket. 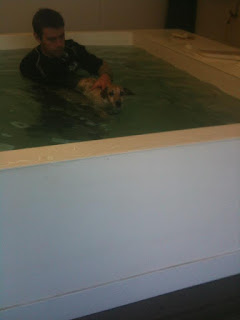 Swimming without a jacket. 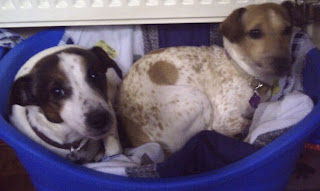 She is only young at eight years old but Lucy has a personality that is like no other and we love her dearly so as long as she is with us we will continue to care and hope that the dreaded day of her leaving us doesn't come for a long time yet.
Posted by Dilys J Carnie
Email ThisBlogThis!Share to TwitterShare to FacebookShare to Pinterest