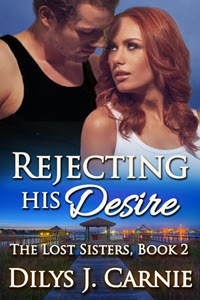 Rose Eagleton has never let anyone penetrate her tough exterior. She won’t allow herself to be hurt again, nor will she let anyone uncover the secrets of her past, which she has successfully hidden for years. But when she meets Jack Calloway he refuses to let her hide behind her shell. She’s confused about her feelings for this man who takes every opportunity to be close to her, to touch her, to make her feel. But she knows one thing for sure—she can’t let him become important to her.

Jack’s motto had always been ‘to protect’. An ex-Navy Seal who is now part owner of a security firm, he takes his work seriously. When he installs a security system in Rose’s club as a favor to her sister, he finds himself intrigued by the beautiful young woman who fights so hard to keep him at a distance. As he discovers the secrets she’s trying so desperately to hide, it becomes clear that her life is in danger. Can he break through her shell and provide her with the protection she needs but refuses to accept?

"Honey girl, you look as if you'd rather be somewhere else."
The familiar voice made Rose's stomach clench and her heart race.
She cleared her throat, turning around. "I was thinking about changing my clothes. I'm not really all that comfortable in this type of attire."
Jack's dark eyes went over her from top to bottom, his perusal slow, until his eyes rested on hers. "That'd be a real pity, Rose, 'cause you look beautiful in that dress."
"Yeah, right." She laughed. "Is that a pick-up line, Jack?"
Even on her best day she thought she just looked 'okay', nothing out of this world, definitely not a beauty like Daisy and Jasmine. Rose thought that the beauty gene must have passed her by, because her two sisters were beautiful while she was merely passable.
The male species were okay, but she'd never found one that made her sigh and swoon. She was used to putting up a front, fighting her battles, but truth be told, she was embarrassed and felt uncomfortable in such close proximity with Jack.
He reached over, slipping his finger around a curl that the hairdresser had tonged into her straight hair, it was left loose while the rest of her hair was piled on top of her head. He twined it around his finger, doing it as if it were the most natural thing in the world.
She reached up, circling his wrist with her fingers, only they were too small, and it made her aware of just how large he was.
He gave her a questioning look. "You gonna try and throw me down the stairs or something?" His mouth twitched as his eyes twinkled with amusement.
She stared hard at him. She didn't like to be touched. "If I have to."
Rose was defiant; she knew for sure that no way in hell would she be able to do that. When he'd allowed her to kick his six and a half feet of muscled body out of her club she'd had to admit surprise. Rose thought a man like him would have been mortified by a female getting one over on him, but he hadn't even lifted a finger to stop her.
He stepped back, and she held her breath when she felt his fingers touch her neck as he let go of her hair. Her insides did that shaking thing which had also happened the last time she saw him. He leaned against the banister and shoved his hands into his trouser pockets.
"So why'd you laugh when I called you pretty?"
"Because I thought it was funny and a terrible pick-up line."
He raised his eyebrows. "You think that was a pick-up line?"
"Wasn't it?" She moved back, or tried to; she was already pushed against the window. He was so close, she had to look up to talk to him. The air seemed limited, and she blew out a breath to cool her very unattractive sweaty upper lip.
"No, it was the truth. You look beautiful."
She tried to be casual by shrugging her shoulders, but she was standing in four-inch heels, and the movement unbalanced her—there was no way that was ever going to end well. She fell forward straight into his arms, her braless breasts squashed into his hard chest.
Immediately her nipples hardened, and she was shocked. She could feel her body enjoying the warmth of Jack Calloway before she realized he had his arms around her with his long fingers laying on the bare skin of her back. Jeezus, was that an electric shock whizzing down her arms to the tips of her toes?
She pushed back, looking up into those black eyes that were half closed. He, on the other hand, seemed perfectly unaffected by what had just happened. Although he wasn't smiling as he had been, the facetiousness had disappeared. She frowned. Had she imagined that sizzle of awareness? No…the soles of her feet felt like a pincushion.
"You are beautiful," he insisted.

My home is on the beautiful island of Anglesey on the west coast of North Wales. Anglesey has been my home since the age of eleven after moving here with my mum and dad and three sisters from Scotland.
I'm the proud mother of two grown children. My daughter Emma is a primary school teacher, and my son Christopher is part of the family business.
I'm a health freak and a vegetarian. Pilates class combined with visiting the gym at least four times a week keeps me fit. I love clothes, makeup, and having my nails and hair done. I'm just a girl's girl.
If I'm not in my office pounding the keys I'm sitting in my favorite chair reading books and discovering new authors on my Kindle.
As a young child I loved to write. I always carried a notebook and pen around with me and wrote about everything. I never thought for one moment I would ever be able to pick up a book with my name on it and say "I wrote that". It was a dream coming true when I signed with a publisher for my first book in November 2012. So, dare I say at the young age of fifty I think it's time for me to see if those dreams are everything that I hope they will be.